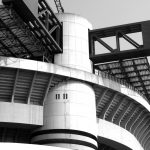 The official name of the stadium is Giuseppe Meazza, but it usually is called San Siro Stadium as the milan area where it is located. It is the Milan and Inter home stadium during champinship time and it is a spectacular venue for summer concerts.

Inside the stadium there is a football museum with an awesome tour in the private area which are not accessible during the event.
So that your can walk out of the tunnel as Marco Van Basten and Ronaldo did during the champions legue football match.
The tour and the museum are a very good side activities for your meeting and your business trip.

The stadium is 13 km away from our hotel and it can be reached also with public transport:
From the station of Novate Milanese, 800 metre from our hotel, take the train S3 – Cadorna direction – and get off in Domodossola Station. Change and take the purple line underground to SAN SIRO station.

If you are attending an event in San Siro, let us know and
you will get a complimentary late check out!!!